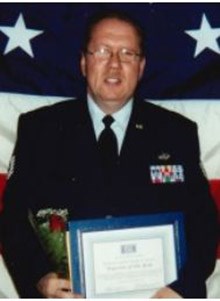 Niles – Thomas L. Nevin, 59, passed away on Sunday September 13, 2020 at St. Joseph’s Warren Hospital.
Tom was born on October 5, 1960 in Warren, OH, raised by the late Lyle and Iva (Williams) Nevin. After graduating from high school, Tom joined the United States Air Force and proudly served his country from November 13, 1979 until July 15, 2011, where he obtained the rank of Master Sergeant. In the Air Force, Tom was an electrical power production craftsman. While in active duty status, he toured with the Airforce Entertainment Ensemble known as the Tops in Blue.
Tom was deployed seven different times to the Area of Responsibility in support of Operation Enduring Freedom, Operation Iraqi Freedom, and Operation New Dawn. These deployments took place between January 2001 and September 2010. Three of those seven deployments took him to Iraq and a fourth deployment took him to Qatar where he was assigned to a Special Forces Unit in support of their power generation systems.
In 2004 Tom was recognized and selected as the Warrior of the Year by the Association of America’s Army and the United Service Organizations.
Tom was involved in a few different organizations. He was a member of the William Farr Masonic Lodge #672, where he held the title of Junior Deacon, the Cortland Masonic Lodge #529, the Order of the Amaranth, Progress Court #22, the Order of the Eastern Star, Sunrise Chapter #458, the Ancient Accepted Scottish Rite – Valley of Youngstown, and the Aut Mori Grotto where Tom was a clown known as Crash.
Tom served as the treasurer and secretary at different times for the Trumbull County Fraternal Order of Police #195. He was also the Senior Vice Commander for 6 years at the VFW Post #3521. He was a member of the Western Reserve Fish and Game Association in Niles and was an honorary member of the Military Officers Association of America.
One of Tom’s favorite organizations to participate in was Toys for Tots. The 910 Civil Engineer Squadron, that Tom was part of, would collect gifts and money every year at the main gate during the December Unit Training Assembly. Tom would volunteer to stand at the gate every single year to help with the collections. Most of this time, he would be dressed up as Santa Claus and he enjoyed every second of it.
Tom had a variety of jobs throughout the years, but the one that he thoroughly enjoyed was when he worked at Boardman Medical as a respiratory specialist.
One of the countless hobbies that Tom loved to do was photography and he was quite talented to say the least. In his free time, he enjoyed riding his bike, kayaking, fishing, and going to watch the Cleveland Indians and the Browns. Tom’s dog Jayden “Pickles” was a loyal companion and was loved dearly by him. Tom was a people person and never met a stranger. He was a good friend and was loved by so many people.
Tom will be deeply missed by his sister Linda; his brothers Steve, Jerry, and Mark; his friends Gary, Kevin, Dan, Danny, KK, and Nick; and numerous other family and friends.
Besides his parents, he is preceded in death by his extended family Mary and Phyllis.

In lieu of flowers, the family requests that donations be made to Youngstown Blue Coats in Tom’s name.
Friends and family may send their heartfelt condolences by visiting www.lanefuneralhomes.com