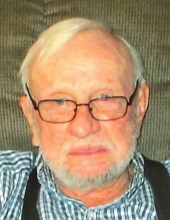 Vic was born July 5, 1932 in Southington, Ohio, a son of Victor G. and Olga (Neumann) Tancer. He was a 1950 graduate of East Palestine High School. Vic served his country as a member of the U.S. Navy. He was a Chief Aviation Machinist Mate and retired as a Senior Chief Petty Officer while serving at the test center at the Miramar Naval Air Station in San Diego, CA. After retiring from the Navy, Vic was a self-employed custom carpenter until 1986 and then started Vic’s Tree Service.

He was also a bus driver for the Canfield School System from 1982 until 1992. Vic was a member of the Mahoning Valley Old Car Club and the American Truck Historical Society. He enjoyed all types of wood-working and also traveling in his motor home. Vic is survived by his wife of 39 years, the former Carol L. Clemons, whom he married January 20, 1981; his son, Daniel K. (Paula) Tancer of North Jackson; his step-daughter, Kimberly Martin (Juston) of Ocoee, FL and his step-son, Barry (Shelley) Tancer of Canfield; his brothers, John (Mary) Tancer of New Springfield, Joseph (Elizabeth) Tancer and Donald Tancer, both of Punta Gorda, FL and his grandchildren, Ashley (James) Lucia, Jacob, Joshua and Emma Tancer.

Besides his parents, Vic was preceded in death by his sisters, Margaret Bush and Vera Kovach and his brothers, Frank, infant brother, Andrew, Lou and Marty.

Friends may call from 5-7 p.m. Wednesday February 12 at the Lane Family Funeral Homes-Canfield Chapel and 10-11 a.m. Thursday, prior to the Service at 11 a.m. at the funeral home. Vic’s favorite color was green and his granddaughter Emma requests that everyone attending please wear something green.