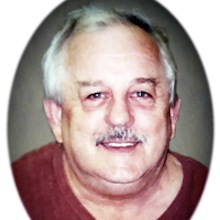 A lifelong area resident, he graduated from Sharon High School in 1965.

For many years, Bones was employed by Sharon Steel’s former Farrell plant. He ater worked in a similar capacity for Astro Shapes in Struthers.

Bones was of the Christian faith.

He enjoyed bowling and participated in a league at Thornton Hall, Sharon.

Bones adored his grandchildren and always looked forward to spending time with his family, especially during the holiday seasons.

He also enjoyed taking trips to the casino with his wife, Sherry.

Bones had a gift for making others smile.

His first wife, Sherry E. Ehrhart, preceded him in death in 1983.

In addition to his parents and first wife, Bones was preceded in death by sisters Barbara Anderson and Jan Vadala, and brothers Larry Erhart and Alan Ehrhart.

Memorial donations may be directed to the American Cancer Society.

Calling hours will be Saturday (July 24) from 2 to 4 p.m. in J. Bradley McGonigle Funeral Home and Crematory, Inc., 1090 E. State St., Sharon. A funeral service will follow at 4 p.m., in the funeral home with Pastor Bruce Rosa officiating. Interment will be at West Side Cemetery, Sharpsville.

Online condolences may be sent to the family at www.McGonigleFuneralHomeandCrematory.com.