According to the Ohio State Highway Patrol, traffic fatalities on Ohio roads have increased in five of the past six years.
Feb 14, 2020 1:15 PM By: Mahoning Matters staff 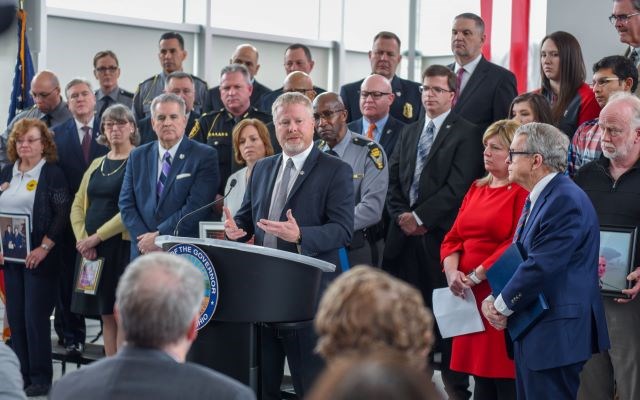 State Sen. Sean O'Brien, D-Bazetta, speaks Thursday during the announcement of details on the Hands-Free Ohio bill, which would strengthen Ohio's laws regarding the use of wireless devices, including smartphones, while driving. (Photo courtesy of ohiosenate.gov)

COLUMBUS — Ohio Gov. Mike DeWine on Thursday (Feb. 13) announced details of a new bill that would strengthen Ohio's laws regarding the use of wireless devices, including smartphones, while driving.

"The use of wireless devices while driving has become so common that many drivers don't stop to consider the deadly consequences," DeWine said in a news release. "Although Ohio's current laws are well-intended, they simply haven't gone far enough to change the culture around using technology behind the wheel. By strengthening Ohio's laws, we believe we can change behaviors, prevent crashes and save lives."

With limited exceptions, the Hands-Free Ohio bill will make driving while handling any electronic wireless device a primary offense. This includes, but is not limited to, writing, sending or reading texts; watching or recording videos; taking photos or looking at images; livestreaming; using apps; entering information into GPS navigation programs; dialing phone numbers; or holding a device for a phone call.

Currently, using a hand-held electronic wireless communications device to write, send or read a text-based communication while driving is a secondary offense for adult drivers. Law enforcement cannot make a traffic stop unless the driver also commits a primary traffic offense, such as running a red light. The penalty is a fine of up to $150.

The Hands-Free Ohio bill will increase fines for drivers who habitually use devices while driving. In cases where a driver using a device causes serious injury or death, the penalties will mirror those of drunken driving.

"We must make the use of wireless devices behind the wheel as unacceptable as drinking and driving is today, and we believe that tougher consequences will be a strong deterrent," Kunze said. "The purpose of this bill is not to make more traffic stops or put more people in jail, it's to get drivers to put down their phones so that people stop getting hurt."

According to the Ohio State Highway Patrol, traffic fatalities on Ohio roads have increased in five of the past six years. Provisional data shows that 2019 was the second-deadliest year of the past decade with at least 1,157 people killed in Ohio traffic crashes.

"We have no doubt that fatal crashes in Ohio have increased due to smartphone use," O'Brien said. "Other states that have enacted hands-free laws have seen significant reductions in traffic fatalities, and I'm confident that our Hands-Free Ohio bill will lead to more responsible driving all over the state."

Exemptions in the bill include using hand-held wireless devices for emergency calls; while in a stationary vehicle outside of the lane of traffic; in hands-free mode to talk on the phone, dictate text-based messages or listen to received messages; in circumstances where an action can be accomplished with only a single swipe; in public safety or utility professions, as necessary for duties; or if the wireless feature is a permanent part of the vehicle.

Additionally, the bill permits drivers to use GPS devices for navigation. However, destinations must be entered before driving begins and the device cannot be held or supported with the body.

To help educate drivers on the changes in the law, the Hands-Free Ohio bill includes a provision directing law enforcement to issue warnings for violations during the first six months after the signing of the bill. The Ohio Department of Transportation also will install road signs to alert drivers from other states to Ohio's regulations.

Ohio attorney general joins price-gouging battle
Sep 26, 2020 11:52 AM
Comments
We welcome your feedback and encourage you to share your thoughts. We ask that you be respectful of others and their points of view, refrain from personal attacks and stay on topic. To learn about our commenting policies and how we moderate, please read our Community Guidelines.