The bill is sponsored by state Reps. Don Manning of New Middletown and Michael O’Brien of Warren.
Feb 7, 2020 3:52 AM By: Todd DeFeo 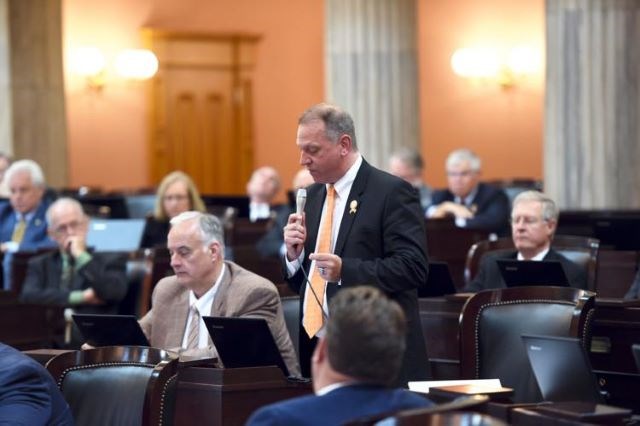 COLUMBUS — Ohio lawmakers are considering a proposal to legalize the purchase and use of fireworks in the state.

House Bill 253 would create the Ohio Fire Code Rule Recommendation Committee, composed of officials at the local and state level to advise the state fire marshal on rules around the use, sale and manufacture of fireworks.

Current law requires consumers who purchase fireworks in Ohio to transport them out of the state within 48 hours of purchase. It also bans anyone from using fireworks — known as 1.4G fireworks — in the Buckeye State.

The bill, sponsored by state Reps. Don Manning, R-New Middletown, and Michael O’Brien, D-Warren, would impose a 4 percent fee on purchases of 1.4G consumer fireworks starting June 1. It is not clear how much revenue the state might see from the fee, according to a Legislative Service Commission review of the bill.

The bill also seeks to establish a fireworks retailer license, which would be capped at $25 and would have to be renewed annually. More than 2,000 locations could be licensed, potentially bringing in $50,000 in annual fees, according to the LSC review.

Bruce Zoldan, CEO of Phantom Fireworks, said fireworks are much safer when legally sold and thus subjected to inspections.

"We want to be inspected," said Zoldan. "We want to make sure that the products we're selling are licensed by the federal government's Consumer Product Safety Commission and that they do not have any illegal explosives."

House Bill 253 would also allow retailers like Phantom Fireworks to locate stores in retail areas. Many stores are currently relegated to locations further from the population base, Zoldan explained.

Not everyone is in favor of the proposal.

“Every year, we see news reports across the state of injuries to children and damage to property resulting from fireworks discharge,” Bill Cotton, who spoke on behalf of the Ohio Chapter of the American Academy of Pediatrics, told members of the House Commerce and Labor Committee.

Do you need help getting a ticket refund?
Jul 8, 2020 12:15 PM
Comments
We welcome your feedback and encourage you to share your thoughts. We ask that you be respectful of others and their points of view, refrain from personal attacks and stay on topic. To learn about our commenting policies and how we moderate, please read our Community Guidelines.