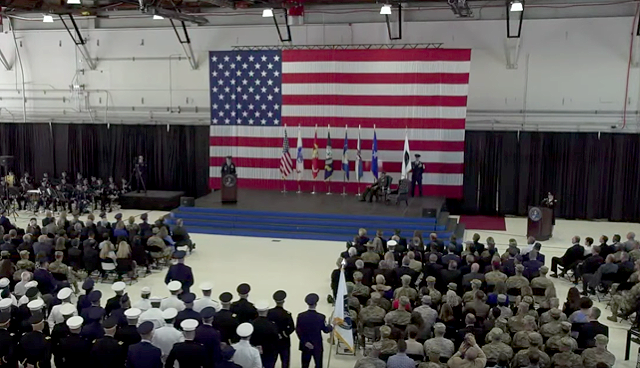 COLUMBUS — The state Senate passed a resolution urging the federal government to locate the U.S. Space Command in Ohio.

Moving the space command to Wright-Patterson Air Force Base and the Dayton area could bring as many as 1,400 jobs to the Buckeye State, officials say. The feds could announce a decision in early 2021.

“The Dayton region is the ideal place for the U.S. Space Command headquarters,” state Sen. Bob Hackett, R-London, said in a statement. “We will do all we can to strengthen and expand this industry right here where it all began, the birthplace of aviation and the future of aerospace — Ohio.”

Gov. Mike DeWine threw his support behind the push. Beavercreek Mayor Bob Stone submitted a nomination, and the governor sent a letter endorsing the plan to the assistant secretary of the U.S. Air Force.

Wright-Patterson is home to the National Air and Space Intelligence Center, which “is the Department of Defense’s primary source for foreign air and space threats,” according to its website. The Air Force Research Laboratory is also located in Ohio.

“Wright-Patterson Air Force Base and the Dayton region would be excellent hosts for the U.S. Space Command’s new headquarters,” DeWine said in a statement. “This area is already home to the National Air and Space Intelligence Center, Air Force Research Laboratory, Air Force Life Cycle Management Center and Air Force Material Command. It’s a powerful combination and a synergy that you can’t find anywhere else.”

“Ohio is home to many fine institutions that support Ohio’s aeronautical pioneers,” Householder said in a statement. “Our great state represents the best and the brightest minds in our nation that have tackled problems and challenges of space travel and space-based threats with steadfastness and composure.”