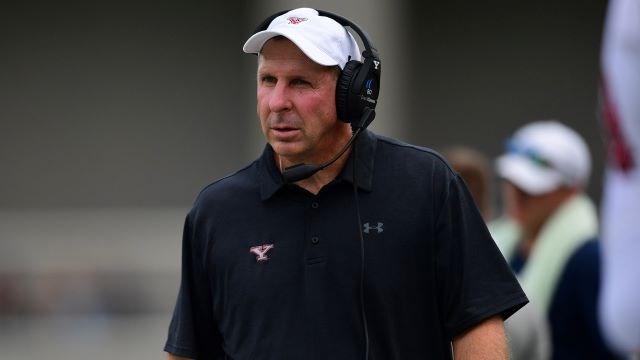 YOUNGSTOWN — Bo Pelini is trading in his hometown for the opportunity to return to another former residence.

Sports Illustrated is reporting that Pelini will be paid approximately $2 million per season.

"The past five years have been terrific,” Pelini said. “I can't thank President Jim Tressel and [athletic director] Ron Strollo enough for the opportunity here and support along the way. For all of the people, honestly too many to name, who were part of my YSU experience, I also want to extend a heartfelt thank you."

Strollo said a national search for Pelini's replacement is underway. Pelini's brother, Carl, is an assistant coach on YSU and was head coach at Florida Atlantic for two seasons.

Bo Pelini is no stranger to Baton Rouge, La. From 2005-07, he was defensive coordinator when Les Miles was LSU's head coach. In 2007, LSU defeated Ohio State — Pelini's alma mater — in the national championship game.

"The experience for me professionally to coach my hometown university and to appear in a championship game is something I will always treasure,” Pelini said. “ For [wife] Mary Pat and I, Youngstown will always hold an element of home for us with our children graduating from Cardinal Mooney High School and so many of our family members residing here. My YSU days will always be special for the entire Pelini family."

"And trust me, I will be checking in every week in the fall to follow the Penguins as they continue to build on our successes, and I know they have great days ahead."

Pelini's five-year tenure at YSU has had its ups and downs. The peak was the 2016 season when the Penguins advanced to the FCS championship game, losing to James Madison, 28-14, in Frisco, Texas. The Penguins finished 12-4.

"We'd like to thank coach Pelini for the passion that he brought on the field and for returning home to lead our program the past five seasons,” Strollo said. “We wish Bo and his family the best of luck in their future.

“The Youngstown State football program is very special to this community, and we will work tirelessly to find someone to build on what coach Pelini established here."

Pelini picked up his 100th career head coaching victory Nov. 23 in the Penguins' 21-3 win over Illinois State at Stambaugh Stadium.

"The opportunity to return to LSU is truly unique,” Pelini said. “Culturally, with my prior experience at LSU, I know it is a great fit for me.

“The chance to work with coach [Ed] Orgeron, the ability to take charge of the Tigers defense. All of that in a place that both my family and I immensely enjoyed when we were there before is very exciting for us. We are very honored and looking forward to this next chapter."

In 1993, Pelini was Mooney's quarterbacks coach. A year later, he became a defensive backs coach for the San Francisco 49ers and had that position for three seasons. He was on staff when the 49ers won their last Super Bowl after the 1994 season.

After three seasons coaching with the New England Patriots and Green Bay Packers, the University of Nebraska hired Pelini as defensive coordinator in 2003. Pelini was head coach for one game after the Cornhuskers fired Frank Solich.

A year later, Pelini joined Mooney alum Bob Stoops' staff at the University of Oklahoma as co-defensive coordinator. His three years at LSU preceded his being hired as Nebraska's head coach in 2008.

After seven seasons, Nebraska fired Pelini in November 2014. Because he had four more years on his contract, Pelini received a payout of approximately $7.9 million.

In January 2015, Pelini returned to his hometown to replace Eric Wolford as YSU head coach. After a 5-6 season in his first campaign, the Penguins rebounded to qualify for their first FCS Championship Game since 1999.

Ravens coaches visit Youngstown YMCA to share training ideas
Feb 17, 2020 5:44 AM
Comments
We welcome your feedback and encourage you to share your thoughts on this story. We ask that you be respectful of others and their points of view, refrain from personal attacks and stay on topic. To learn about our commenting policies and how we moderate, please read our Community Guidelines.