Both the 49ers and Chiefs have ties to Mahoning County

Mahoning Valley coaches, players and media veterans weigh in with their Super Bowl predictions.
0
Jan 31, 2020 9:52 AM By: Tom Williams 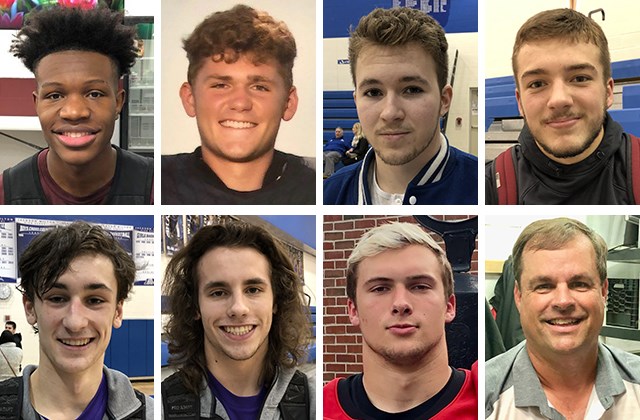 Sunday night, someone with Mahoning Valley roots will have access to the 54th Lombardi Trophy.

The San Francisco 49ers and the Kansas City Chiefs — the combatants in Super Bowl 54 — have ties to Mahoning County.

Deland McCullough, the Chiefs’ running backs coach, is a graduate of Campbell Memorial High School. As an infant in 1973, he was adopted by Adelle Comer and A.C. McCullough, long-time HOT 101 disc jockey.

About three years ago, Deland, who played for Miami University, the Cincinnati Bengals and the Winnipeg Blue Bomers, found out that his birth father is Sherman Smith, a graduate of North High School.

Smith was a running back for Miami University, Seattle Seahawks and San Diego Chargers. He also enjoyed a lengthy coaching career in the NFL with the Seahawks and Washington Redskins.

The 49ers are owned by John and Denise DeBartolo York of Canfield. Their eldest child, Jed, is the team’s CEO.

Who’s going to win? Opinions vary. Let’s start with a couple of colleagues of mine who covered the Super Bowl for The Vindicator the last two times the 49ers were in the NFL championship game.

Many consider it a glamorous assignment, and Todor, now the sports editor at the Alliance Review and Kent Record-Courier, admits the NFL does a nice job with activities for the media leading up to the game.

But when the game ends, it’s time to work.

“Sunday was just a blur,” Todor recalls of his main assignment — getting an interview with 49ers owner Eddie DeBartolo Jr.

In January 1995, the 49ers became the first NFL team to win five Super Bowls when they demolished the Chargers, 49-26, in Miami.

Leading up to the game, Todor said he had no luck getting close to DeBartolo, Denise York’s brother who was the 49ers owner from 1977-99. Todor’s fortunes changed when he saw Ed Muransky in the mad scamble that is the postgame interview gathering.

“I introduced myself and said, ‘Is there any chance I could talk to Mr. DeBartolo?’” Todor said.

Muransky gave Todor a pass to the victory party at the 49ers’ hotel. Todor conducted a couple of quick interviews for his other stories, then took off in his rental car for the 49ers’ hotel.

“They had at least two huge tents set up, maybe three — hundreds of people,” Todor said.

He accomplished his mission, speaking with DeBartolo.

Well past midnight, Todor raced back to his hotel to start writing. Back then, The Vindicator was an afternoon paper, so he had all night, except there was a plane to catch in the morning.

“I didn’t get a whole lot of sleep — that’s probably why it’s still a blur,” Todor said.

“After the Chiefs dodged the Texans in the Divisional Round, they are a team — and Andy Reid is a coach — of destiny,” Todor said. “Granted, both teams seem fairly even in defensive strengths and offensive firepower, but Patrick Mahomes can carry a team on his back, and I'm not convinced Jimmy Garappolo can equal that.”

Joe Scalzo, a sportswriter with the Canton Repository, has a different take. Seven years ago, Scalzo was The Vindicator sportswriter who covered the Super Bowl in New Orleans between the 49ers and Baltimore Ravens.

The Vindicator was a morning paper then, and Scalzo’s deadline was approximately 1 a.m. Not long after Beyonce’s electric halftime show, the power went out in the Louisiana Superdome. Scalzo called an audible to complete his assignment.

“The Yorks weren’t anywhere to be found,” said Scalzo after the Ravens won, 34-31. “I didn’t have any access all week.”

So he wrote a column about how Twitter went crazy during the game delay.

“Twitter was new at the time, so the jokes were fresh and funny,” Scalzo said. “I don’t think you could do that now.”

He also wrote a sidebar on the 49ers.

“I wasted like 40 minutes [searching for the Yorks], so I ended up writing something that I hated, just to get it in under deadline,” Scalzo said.

“I just don’t know if you can beat the Chiefs without scoring a ton — holding them to 35 would be like a win,” Scalzo said, adding that he considers the 49ers to be “more complete.”

One more media take. Sunday’s game will be only the second Super Bowl in 15 years that Ed Puskas will watch away from his work desk. Puskas was sports editor of the Warren Tribune for seven years, then had the same post at The Vindicator for the same amount of time.

“Probably going to park myself in the permanent crease in the couch and watch,” said Puskas, now the editor of the Ashtabula Star-Beacon. His job now is more of a 10-6 job, much different from the nights and weekends that sports staffers endure.

“I’ve probably watched more sports in the past five months than at any point in recent history, being able to devote my full attention rather than sitting in front of a computer,” he said.

Puskas agrees with Scalzo that the 49ers will win, picking a score of 35-23.

“I think their defense is going to be the difference-maker,” Puskas said of the Niners. “I think they are going to be able to get off the field more than some of the teams that the Chiefs have played.

“The Chiefs are going to have a hard time stopping that run game.”

Most high school coaches and players in this unscientific survey believe the 49ers will win. But some think Kansas City has a chance to end its 50-year title drought.

“They are playing with a tremendous amount of confidence,” Fecko said of the 49ers. “Their defense has been pretty dominant.

“I don’t think they are going to stop Mahomes, but [could] contain him. They’ll probably get a defensive score, and their offense is running the ball pretty well.”

Chaney head coach Chris Amill, a Mooney assistant for 16 seasons, thinks the Chiefs will prevail in a shootout, 35-31.

“I don’t know if the 49ers, if the Chiefs start scoring, how much they can keep up with them,” Amill said. “More and more, it seems offenses are winning these [big] games. The offensive firepower that the Chiefs have on the outside is going to be the difference.

“Guys like [Chiefs wide receiver] Tyreek Hill can take a 4-yard pass and go 90 yards in the blink of an eye.”

Citing the local connections, Amill said, “I guess I’ll be happy either way.”

Get this: the 49ers are getting love from Ursuline, Mooney’s archrival. Michael Kernan, the Irish girls varsity basketball coach and softball coach, picks the Niners, 30-27.

“I think they are better in all three phases: offense, defense and special teams,” Williams said.

“The Chiefs have that high-powered offense, but San Fran has an outstanding defense, and they always say that defense wins championships,” Marrow said.

"Coach Reid is a great coach and was part of the staff when Green Bay won the Super Bowl against New England [in 1997]." Yeagley said.

Evan Ohlin, Springfield’s wide receiver and defensive back who played in the Division VI state championship game in December, also favors the Niners, 31-27.

“Both have very good offenses, but the 49ers defense is very good, too,” Ohlin said, adding he thinks San Francisco will get more stops.

Ohlin also likes that Garoppolo has Super Bowl experience when he served as Tom Brady’s backup with the New England Patriots.

“I think that experience will really help him,” Ohlin said.

Canfield’s Nick Crawford, a state champion wrestler who was the Cardinals’ top running back last fall, also likes the Niners, 28-24. His reason?

“They have all the momentum,” Hunter said, referring to blowout playoff wins over the Minnesota Vikings and Green Bay Packers.

Zane Peterson, the Trojans quarterback, is picking the Chiefs, 31-21.

“I like Patrick Mahomes. I like watching him, how he plays,” Peterson said. “He’s a really good quarterback.”

“They have a better quarterback, a better all-around team, and they have been playing [well] lately,” Lengyel said.

“He’s the greatest quarterback in the NFL today,” said Prozy, who thinks the Chiefs will win, 34-28.

Citing the 50 years between Kansas City’s Super Bowl appearances, Anderson said, the Chiefs “are hungrier because they have been trying to get to this point for so long.”

“They are going to win because they have a very strong running game, which allows them to open up their passing attack, DeLucia said. “They will overpower the Chiefs’ weak defense and will shut down their offense with their fast, experienced defense.”

Ravens coaches visit Youngstown YMCA to share training ideas
Feb 17, 2020 5:44 AM
Comments
We welcome your feedback and encourage you to share your thoughts on this story. We ask that you be respectful of others and their points of view, refrain from personal attacks and stay on topic. To learn about our commenting policies and how we moderate, please read our Community Guidelines.