“The Robinson-Shuba statue will shine a bright light on racial harmony and the good things that happen when people from different races treat each other right,” said Herb Washington, a local McDonald’s owner.
Feb 3, 2020 5:50 PM By: Mahoning Matters staff 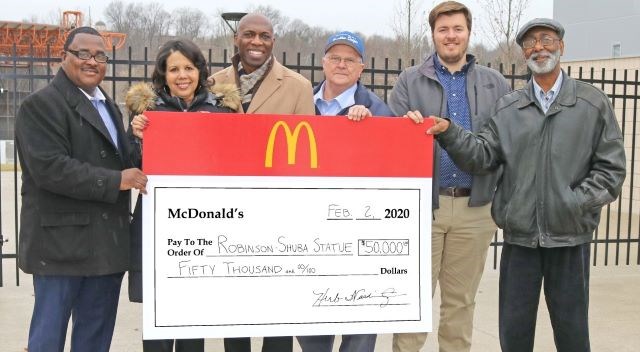 YOUNGSTOWN — Supporters of the proposed statue to mark the historic 1946 handshake of baseball Hall of Famer Jackie Robinson and George "Shotgun" Shuba of Youngstown today (Feb. 3) announced a $50,000 grant for the project from McDonald’s restaurant owners of the Mahoning Valley and Western Pennsylvania.

“This grant is a big step in our fundraising efforts and reflects the broad and growing support of this project throughout our community,” Greg Gulas, co-chair of the Robinson-Shuba Commemorative Statue Committee, said. “We appreciate the community-minded leadership and support of the local McDonald’s restaurants.”

Herb Washington, a local McDonald’s owner and spokesman, said the grant reflects the organization’s “commitment to the great people of the Valley.”

“The Robinson-Shuba statue will shine a bright light on racial harmony and the good things that happen when people from different races treat each other right,” Washington said. “That’s a very important message, and our team is proud to support it. We’re also grateful for this area’s strong support of McDonald’s restaurants, which makes grants like this possible.”

The historic handshake occurred on Opening Day 1946, when Robinson and Shuba were teammates for the Montreal Royals, a farm team for Major League Baseball's Brooklyn Dodgers. Robinson was making his debut as the first African-American player in modern professional baseball.

In his second at-bat, with two other Royals on base, Robinson hit a home run. Neither of the teammates who scored on the homer moved to congratulate him. Shuba, the on-deck batter, noticed that, so he stepped up to shake Robinson’s hand just as the future Hall of Famer was crossing home plate. Several photos captured that moment — the first handshake of black and white players on a professional baseball diamond.

Plans call for the statue to be dedicated April 18, 2021, the 75th anniversary of the handshake. The proposed site for the statue is near the Youngstown Foundation Amphitheatre.

More information about the statue project, including opportunities to support it, can be found at www.robinsonshuba.org.