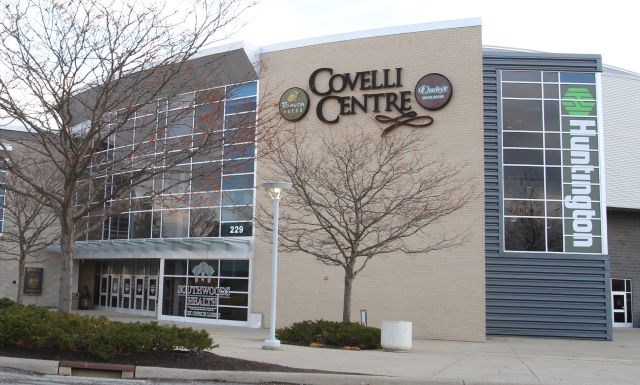 The Covelli Centre, home to the Youngstown Phantoms for 11 seasons, is closed because of coronavirus restrictions. (Photo by William D. Lewis)

YOUNGSTOWN — As the National Hockey League gets ready to crown its 2019-20 Stanley Cup champion, the city's junior league hockey team will have two fewer opponents to play when the 2020-21 United States Hockey League season gets underway.

Friday, the USHL announced that the Cedar Rapids RoughRiders and Madison Capitols will suspend operations for the 2020-21 season. That means the top tier junior hockey league that includes the Youngstown Phantoms is down to 14 teams.

The RoughRiders' home arena, the ImOn Ice Arena, incurred substantial damage during an Aug. 10 derecho storm while the Capitols face significant county restrictions related to COVID-19 that impact their ability to practice, play and host spectators.

Like the Capitols, the Phantoms have a similar problem with spectator restrictions as Ohio's sports guideline has a limit of the lesser of 15 percent seating capacity or 300 for indoor facilities. For hockey, the Covelli Centre can seat 5,700 fans if the tarps in the east stands are removed, approximately, 4.500 with the tarps in place.

Last month, Eric Ryan, president of JAC Management Group which runs the 15-year-old arena, said that it makes no economic sense to reopen for concerts or sports for only 300 customers.

Also in August, the Phantoms, who normally train in September and begin their USHL schedule during the last weekend of the month, announced that the league's start date was pushed back to Nov. 6 with the intention of playing 54 regular-season games by April 24.

The Phantoms have not announced where they would play home games if the Covelli remains closed.

It's possible that Gov. Mike DeWine could amend the state's sports guidance.

In mid-March, the USHL shut down its regular season because of the coronavirus pandemic. Later, the playoffs were canceled.

Now, the USHL has to create a new schedule minus Cedar Rapids and Madison. Both squads played in the Eastern Conference, so a conference realignment is likely.

The league also says a dispersal draft will be held for the players on both team’s rosters.

“Both clubs were resolute in their desire to take the ice, but ultimately these extenuating circumstances prevent them from playing this season,” Tom Garrity, USHL president and commissioner said in a news release. “We share the disappointment of RoughRiders and Capitols fans, and we look forward to welcoming these clubs back for the 2021-22 season.”

This will be the first USHL season without the RoughRiders since they joined the league for the 1999-2000 season. The Phantoms joined the USHL for the 2009-10 season.

Since joining the league, Cedar Rapids has amassed a 665-467-116 record. Mark Carlson, Cedar Rapids general manager and head coach, is the second-winningest coach in USHL history and three-time USHL Coach of the Year (2005, 2011, 2016). He led the team to the Clark Cup Championship in 2005.

“The property damage suffered in the entire Cedar Rapids area by its residents and businesses was significant,” Carlson said. “Our community will rebuild and recover from the storm. We have already begun planning our return for the USHL 2021-22 hockey season.”

The Capitols joined the league starting in the 2014-15 season and have registered 20-or-more wins in four of their five full seasons.

Tom Upton, who was a Phantoms assistant coach for two seasons (2016-18) for head coach Brad Patterson, was hired as Capitols general manager and head coach this offseason after coaching at Mercyhurst College in Erie.

“This is an extremely difficult decision for our organization as we are deeply disappointed for our players, fans and the Madison community,” Capitols owner Ryan Suter said. “However, due to Dane County’s restrictions, we are unable to play games and host fans in our venue. We are preparing our return in the 2021-22 season.”

The Stanley Cup Final between the Tampa Bay Lightning and Dallas Stars begins Saturday in Edmonton's Rogers Place. If necessary, Game 7 is scheduled for Sept. 30.

JCC offers youth basketball clinic in October
Sep 30, 2020 5:24 AM
Comments
We welcome your feedback and encourage you to share your thoughts. We ask that you be respectful of others and their points of view, refrain from personal attacks and stay on topic. To learn about our commenting policies and how we moderate, please read our Community Guidelines.