Kevin Helmick, President and CEO of Farmers National Bank, has taken on the role of 2020 Campaign Chair for the United Way of Youngstown and the Mahoning Valley’s annual fundraising efforts. 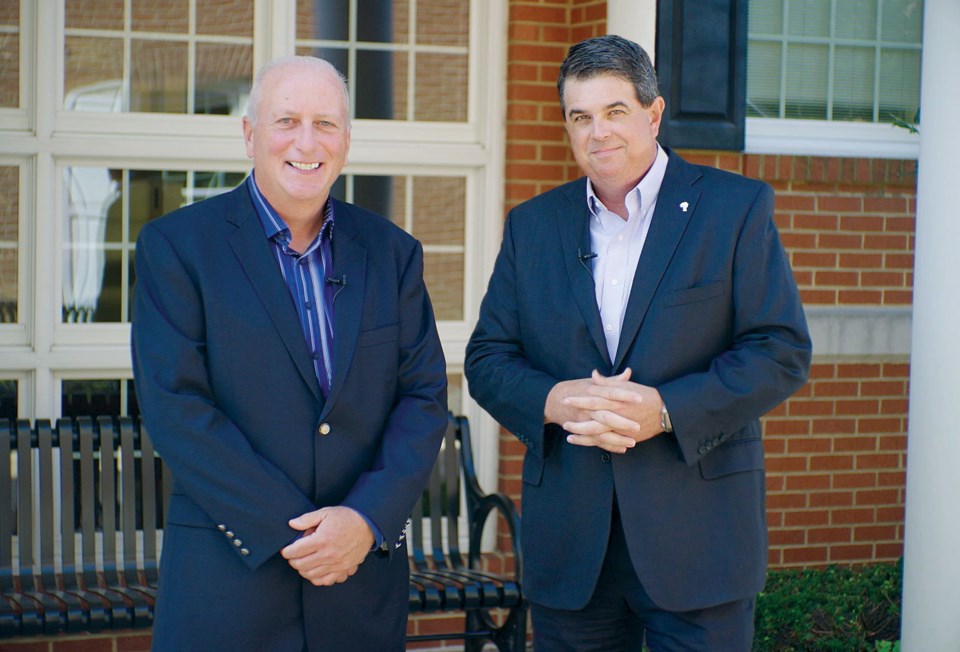 Kevin Helmick, President and CEO of Farmers National Bank, is well aware of how fortunate the bank and its employees have been these past several months.

While COVID-19 has challenged numerous businesses and individuals, his company has remained steadfast. The bank has been busy helping customers navigate this challenging period and its employees have remained employed throughout the pandemic.

“We didn’t lay anyone off, we’ve been very busy helping customers, and we’ve had a very blessed year,” he says. “So, as we have for many years, we will continue to step up financially, as well as donate our time.”

Helmick is a long-time supporter of the United Way and knows all too well that help is needed. This year he has taken on the role of 2020 Campaign Chair for the United Way of Youngstown and the Mahoning Valley’s annual fundraising efforts.

“As a bank, we get involved in a number of different community initiatives and we view our communities as an important stakeholder,” says Helmick. “The United Way does a great job in our communities here in the Mahoning Valley and Northeast Ohio.”

His company’s involvement with the United Way over the years has been very organic. Farmers National Bank and its employees have a history of giving financially, participating in projects and sponsoring events.

“We have always loved being involved. It’s one of those non-profits that are doing a great job and has a wonderful impact,” says Helmick. “I appreciate the leadership and all the good work that they’re doing, so it’s quite a honor to serve as the 2020 Campaign Chair. I feel like I can represent our employees as well as our company, and I know that they’re behind it 100%.”

The CEO knows he has big shoes to fill, following on the heels of last year’s centennial. For the 100-year anniversary, the United Way of Youngstown and the Mahoning Valley had a huge, exciting campaign that was very successful.

“And along came a pandemic,” says Helmick, recognizing the difficulties and uncertainty that many now face. “What we’re trying to do is just to be creative.”

Obviously, the large venue type of events aren’t going to happen, but there is a lot that can still be done, including virtual presentations and online pledge forms.

“There’s been a shift in the way people are meeting and the comfort level people have in getting together in large groups, but we were able to have a golf outing, which was a great event,” he says.

One of the ways Farmers employees have shown support is by participating in the Satur-Day of Caring Food distribution program, in which food is delivered to about 300 households and more than 500 people. It ensures people in the community have access to the food they need, especially seniors who need to take extra precautions.

It’s really easy for Farmers employees to get behind amazing programs like these, says Helmick. There has always been a very high participation rate in United Way fundraising efforts, with close to 90% of employees taking part. Helmick has always stressed that monetary giving is simply one option and there are many ways to make a difference.

“Our people not only give of their treasure, they also give of their talents and their time. Sometimes that’s more impactful,” says the CEO, citing those who deliver meals or take part in the Success After 6 program as examples.

“It’s been such a concern of the United Way,” Helmick says. “How are schools going to return to form and how can we help them?”

Helmick is challenging local business and community leaders to show their support when it really counts.

“We need everyone to step up this year and do a good job,” he says. “We think people recognize the need and we want to be at the top of the list when people think about giving.”

He understands there’s a lot of uncertainty surrounding businesses and that some may not be able to give as they usually do.

“When your business is potentially on shaky ground because of the pandemic, you might be more likely to buckle down and not give as much,” he says.

The focus, then, is to try to increase the total number of givers, expand workplace programs, break into new markets and approach some of those businesses that happen to be doing well during the pandemic.

“The output from the United Way is so needed during a time like this. We’re really hoping people will step up and recognize that it’s an important time to give. Because of the pandemic, the vulnerable population today is as vulnerable as it has ever been.”

Farmers National Bank has been focused on the community since 1887 and is proud to join forces with the United Way of Youngstown and the Mahoning Valley.

Is Mahoning Valley's local news important to you?