A day of surprises: DeWine doesn't appear to have COVID-19 after all

Hours after a White House-administered "rapid" antigen test gave the governor a positive result for the coronavirus, the more reliable PCR test gave him — and the state — a sigh of relief. But in between, it was another wild news day.
Aug 7, 2020 4:11 AM By: Jess Hardin and Ellen Wagner 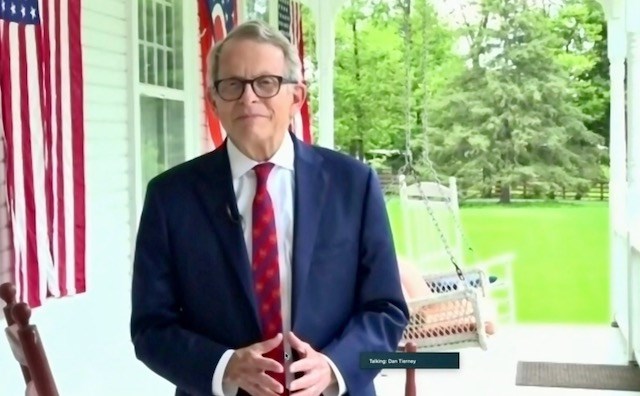 But it appears Vitale spoke too soon.

He had taken a so-called "rapid" antigen test in preparation to greet President Donald Trump before his visit to the Whirlpool manufacturing plant in Clyde.

When DeWine tested positive, he immediately returned to Columbus and took a second test to confirm the results. Lt. Jon Husted tested negative on the same test Thursday.

A release sent shortly after 9:30 p.m. Thursday said DeWine and his wife, Fran, tested negative using a PCR test, which is more sensitive than rapid tests.

"The PCR test looks for the specific RNA for the SARS CoV-2 — in other words, the genetic material specific for the virus that causes COVID-19," the release read. "This test is known to be extremely sensitive, as well as specific, for the virus. The PCR tests for the governor, first lady, and staff were run two times. They came back negative the first time and came back negative when they were run on a second diagnostic platform."

DeWine and his wife will be tested again Saturday.

The false-positive assessment makes sense. In speaking with reporters, DeWine said he had no symptoms, except for a headache, and had no idea how he could have contracted the virus. He called the positive test "a big surprise."

His age — 73 — would put him at risk of complications from the coronavirus; so would his history of asthma.

While DeWine was at first unaware which test he was given at the airport, the reliability of such rapid tests used by the White House has been debated — mostly for false-negative results, not false-positives. The New York Times reported the Abbott ID Now, which yields results in as little as 5 minutes, "could miss infections up to 48 percent of the time, according to a study by researchers at N.Y.U. Langone Health."

The reliability of many different tests was detailed by Mahoning Matters on May 21.

Earlier in the day, when people feared DeWine had tested positive, he received bipartisan support from his colleagues throughout the state.

"We know how hard he’s been working to keep Ohioans safe, and this is just one more reminder that this virus can impact everyone," Ohio Democratic Party Chairman David Pepper said in a statement.

Before it was known that DeWine tested negative, House Rep. Michele Lepore-Hagan, D-58th, said the situation shows how important testing is and how testing options need to improve.

“Our testing options are just failing us right now,” Lepore-Hagan said. “If we can’t have rapid testing, what happens in that time you get tested and three to seven to 10 days later you get the results?”

She encouraged people to wear masks to protect themselves and the people around them, to wash their hands and to maintain social distancing.

State Rep. Al Cutrona, R-59th, said, “I’m sure he will work through it, and we’re all supportive of him and his health.”

• According to the latest figures Thursday from the Ohio Department of Health, the state is reporting 92,273 confirmed cases of the coronavirus. There have been 2,477 confirmed or suspected cases in Mahoning County; 1,481 in Trumbull County; and 1,618 in Columbiana County.

• Statewide, there have been 3,348 confirmed deaths, including 254 in Mahoning County; 105 in Trumbull; and 62 in Columbiana. Mahoning County's 254 reported COVID-19 deaths on Thursday was fourth among Ohio's 88 counties; Franklin County had the most with 521.

• According to the Pennsylvania Department of Health on Thursday, there are 116,521 COVID-19 cases in the state which have led to 7,282 deaths. The state said the recovery rate is 76 percent. There have been 389 cases in Mercer County and nine deaths; 383 cases in Lawrence County and 14 deaths.

• All athletic practices at East and Chaney high schools have been halted, and all athletes will be tested for COVID-19 after a student-athlete at East tested positive for the virus.

• The next Paycheck Protection Program deadline is Saturday after Congress extended the deadline to allow more small-business owners to participate. The National Federation of Independent Business said 4 out of 5 small-business owners already have applied for relief, and almost all of them were granted loans.