The U.S. Department of Justice acknowledged last week Lisbon's FCI Elkton was one of several federal prisons struggling to contain the coronavirus — and employees said Wednesday the situation is already "out of control."
Apr 9, 2020 4:11 AM By: Justin Dennis 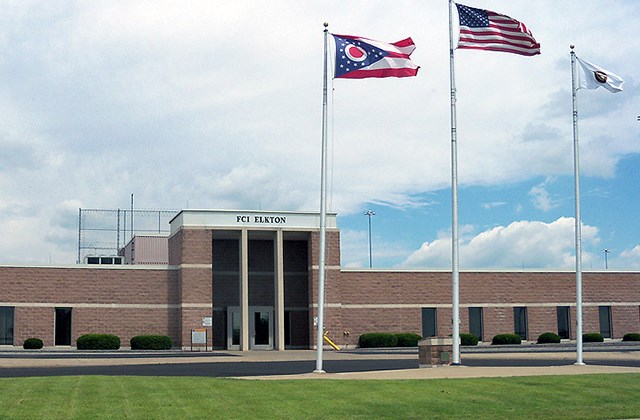 LISBON — The U.S. Department of Justice has stopped sending new inmates to Federal Correctional Institution Elkton, according to a Congressional spokesperson.

Ben Keeler, spokesperson for U.S. Rep. Bill Johnson of Marietta, R-6th, told Mahoning Matters Wednesday though the DOJ previously required “an act of Congress” to divert inmates away from the Lisbon facility, the department later reversed that decision on its own, after calls from Johnson and Ohio Gov. Mike DeWine to stop intake, as well as new legislation to stop inmate transfers introduced last week by U.S. Rep. Fred Keller of Pennsylvania.

“We are moving in the right direction at Elkton, but we must keep working,” Johnson said in a Facebook post Wednesday. “We must ensure the safety and health of everyone there — staff and inmates — and avoid potentially overwhelming our local hospitals.”

A representative from the Federal Bureau of Prisons on Wednesday confirmed inmate movement in and out of the prison has ceased.

FCI Elkton, a low-security facility currently housing more than 2,000 inmates, is one of several federal prisons struggling to contain the spread of the new coronavirus among its inmates and staff, the DOJ acknowledged last week.

Joseph Mayle, president of the American Federation of Government Employees Local 607, which represents corrections officers at the prison, told Mahoning Matters Wednesday the situation there is already “out of control.”

Though the Federal Bureau of Prisons by Wednesday evening was reporting 10 inmates and eight employees have tested positive for the virus — and it’s also since reported the deaths of three inmates — that’s only a fraction of the prison’s potential cases, Mayle said.

Mayle, who meets daily with prison administrators, said Wednesday morning there were 74 inmates in isolation who have either tested positive for the virus or are symptomatic and another 43 who have been hospitalized — including 13 who are on ventilators.

Not all symptomatic inmates have been tested for the virus, he said. Before this week, the prison only had five virus testing kits for its more than 2,000 inmates. On Monday, Columbiana County Health District donated another 80 testing kits to the prison, for which Mayle said he was “very grateful.”

He said, however, the prison’s total testing inventory is still “a drop in the bucket” and wondered why the prison has not received more supplies from the prisons bureau.

“The management here can only do what the regional director and the Bureau of Prisons allows them to do and give them the equipment to do,” Mayle said.

The bureau did this week, however, send the prison another shipment of personal protective equipment now in extremely high demand nationwide — including N95 masks, googles, gloves and aprons — but only one for each employee, Mayle said.

But even with protective gear, there aren’t many ways to avoid exposure to the virus, he said.

“We know that when we come to work we could get assaulted; we could get spit on; feces thrown on us … even die,” Mayle said. “At no time did we think we would be taking something here home that could possibly be putting our spouses or family in danger.”

Johnson has previously said the prison is turning into a “petri dish” where the virus can prosper.

Each prison block at FCI Elkton can house about 330 inmates who live by twos or threes in “open-bay” cubicles of about 12 square feet with six-foot-high walls, Mayle said. Inmates are able to leave the housing units for meals and recreation time. Workers this week have begun spraying disinfectant inside the cubicles when the inmates leave, he added.

Though a Facebook Live video published Friday by one FCI Elkton inmate painted an alarming portrait of the prison’s conditions — appearing to show one inmate who was struggling to breathe and suggesting multiple inmates have died while inside — Mayle on Wednesday asserted the video was “staged.”

He said the inmates featured in the video have not shown symptoms of the virus and no inmate has died while at the facility.

“They never were sick. It was all staged — nothing but publicity,” Mayle said. “These guys will do anything they can to get out early.

“If I was in the same spot, I’d be trying to find a way to get home too. It’s unfortunate that he’s using something as serious as a means to cause mass hysteria.”

Mayle said he’s concerned the DOJ’s push for some inmates to be removed from the prison system and placed on home confinement — where they’ll also face a 14-day quarantine — is too little, too late, and instead poses a greater risk to the community.

On Wednesday, 21 inmates were set to leave the prison for halfway homes or full-time release, he said. Another 39 who are candidates for home confinement have yet to be screened, and he added it’s likely “very few” will meet the criteria.

A March 31 memo from Columbiana County Health Commissioner Wesley Vins indicates the district is treating all individuals associated with the prison as if they had contact with a positive COVID-19 case, meaning they must quarantine and avoid public spaces when not at the facility.

“Stop moving inmates — period,” Mayle said, adding that transfer out of prison to a halfway house is a “privilege.”

“Until this is over, there’s ‘no halfway house.’ Everyone stays where they’re at,” he said.

A few dozen members of the Ohio National Guard were deployed this week to assist the prison’s depleted medical staff with confirmed COVID-19 cases and non-COVID cases, as well as with hospital transports.

But Johnson on Wednesday said the Guard “cannot stay there forever — nor should they, as they have other responsibilities around the state.”

“We will continue working the issues at Elkton, and everyone who works there or has a family member there should know that all levels of government are engaged to make sure we do get the support we need,” Johnson said.