COVID's delta variant is looming. Here's what pediatricians want you to know before back-to-school season

“We are one variant away from [COVID-19] being worse for kids," said Dr. Patty Manning-Courtney of Cincinnati Children's Hospital.
Jul 22, 2021 4:00 AM By: Justin Dennis 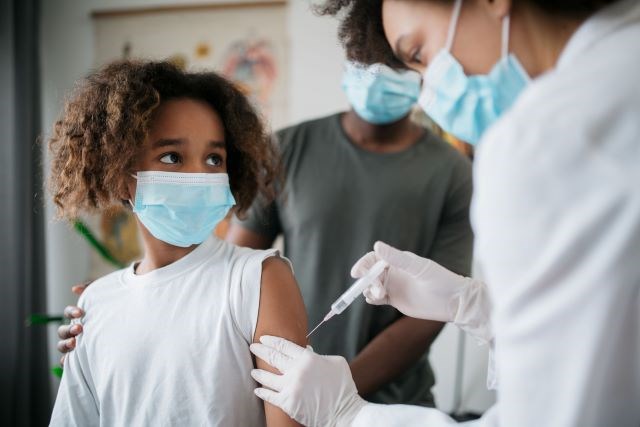 With the 2021-22 school year drawing near, state health officials and pediatricians speaking to reporters Wednesday reiterated the importance of the COVID-19 vaccine for students and their parents. And as no vaccine has been approved for children younger than 12, they’re left vulnerable, meaning adults and teens must step up.

“While children are less likely than adults to get severely ill from COVID-19 …  they’re not invulnerable. And the pandemic has taken a real toll on children,” said Dr. Bruce Vanderhoff, the Ohio Department of Health’s chief medical officer.

Though Akron Children’s Hospital isn’t seeing an increase in COVID-19 pediatric hospitalizations at its campuses in Akron and Boardman, more infections are now being seen in elementary-age kids, said Dr. Robert McGregor, Akron Children’s chief medical officer. Whereas 12- to 15-year-olds was once the dominant age group, it’s now 5- to 10-year-olds, he said.

“It’s really unique to areas that have really low vaccine uptake. The lower the vaccine rate of the general population, the sicker the population and the children seem to be,” McGregor said.

“The vast majority of pediatric cases are adult exposures,” said Dr. Amy Edwards of University Hospitals Rainbow Babies and Children’s Hospital. “If all the adults in a child’s life are vaccinated, that child’s risk of acquiring COVID is exceedingly low.”

Pediatrician Dr. Patty Manning-Courtney of Cincinnati Children’s Hospital said though the hospital has seen more than 12,000 children who’ve tested positive for COVID-19 yet weren’t sick enough to need hospitalization — though some have long-term symptoms — “we are one variant away from [COVID-19] being worse for kids.”

The doctors said Wednesday they’re looking to allay parents’ concerns about the safety of the COVID-19 vaccine and fight back against rampant misinformation causing vaccine hesitancy.

“This burden of parenthood — we’re terrified all the time that we’re going to do something wrong or we’re going to harm our child,” said Edwards. “What we really need to do … is really listen and understand what the parents’ concern is. … Show that information they heard was incorrect.

“I think it’s really incumbent on us in the medical community to listen to our patients. That’s why I would encourage those interested in the vaccine to reach out to their doctor and have a conversation with them.”

Vanderhoff said medical experts are well aware of the vaccine risks parents are weighing — such as the small chance of developing myocarditis, an inflammation of the heart — but that “the benefits of these COVID-19 vaccines far exceed the risks.”

Many believe the COVID-19 vaccines and the mRNA delivery system they’re based on are largely untested technologies. But McGregor noted Moderna and Pfizer had a “head start.” Before the pandemic, the companies were working on a new mRNA vaccine for Middle East Respiratory Syndrome, or MERS, and that vaccine was ultimately re-engineered for COVID-19.

Edwards said mRNA vaccines “have been around for ages” and have been used to treat the flu and Zika viruses.

“There’s nothing different about immune response to mRNA than any other virus — they all do the same things, which is to activate those B-cells and T-cells to protect us from new infection,” she said.

Noting the vaccines’ “phenomenal” safety records after hundreds of millions of jabs around the globe, “there’s no reason to think kids are different in that respect. They should respond to the vaccine,” Edwards said.

“We have to meet [parents] where they are. I understand there’s a lot of reasons people have gotten misinformation. … ‘The first two waves, kids didn’t get sick, so why would I do this?’” he said.

Vaccine hesitancy is also driven by a perpetual deluge of misinformation online, the doctors said. About one-fifth of Americans believe the vaccines contain microchips allowing the government to track them, according to a recent poll. In the past month, viral video trends suggested the vaccine made people magnetic.

“Vaccine misinformation has been harming children for decades. I’ve watched a child die of whooping cough here in the U.S. — that’s unacceptable,” Edwards said, referencing a case in which the parents “were afraid the vaccine would harm their children” and never vaccinated the child’s older siblings, who passed it on to them.

The FDA issuing full approval for the COVID-19 vaccines would likely “instill confidence” in their safety, Manning-Courtney said. Currently, the U.S.’ three vaccines are only authorized for emergency use.

The FDA approval process involves a mountain of paperwork and “red tape,” and the FDA has pledged not to cut corners on that process, Edwards said.

“Most of us don’t think it’s gonna get approval until sometime in early to midwinter,” she said. “Not because we need more data but just — that’s how long it takes.”

At least two of the coronavirus vaccines, those developed by Pfizer and Moderna, have an efficacy rate over 90 percent, and they’re reported to be strong in the face of the delta variant.

But in those margins are “breakthrough infections.” That’s when the vaccines fail to stop the virus, but are able to reduce its viral load so much that the infected, in some cases, aren’t even contagious, Vanderhoff said.

Though the U.S. Centers for Disease Control and Prevention recommends only the unvaccinated continue to wear masks, the American Academy of Pediatrics on Monday urged ‘universal masking’ regardless of vaccination status for the 2021-22 school year.

The academy said students age 2 and older and all school staff should mask up because “a significant portion” of students are not yet eligible to receive a vaccine. Currently, only the Pfizer vaccine is approved for those age 12 and older.

McGregor, an academy fellow, suggested school administrators reach out to local health officials when engaging with parents on the issue of keeping masks in schools.

“If a school district is ambivalent or doesn’t understand it, they’re not going to be the best messenger to help the public understand it,” he said.

“We have a great presence at a lot of the schools in the Valley. We try to really support them. We recognize each community is right now making their own way. I’m hoping the state will come out with recommendations,” McGregor said.

The spread of the delta variant and other potential, yet-unknown variants could make the fall back-to-school season “a new game,” McGregor said.

Vanderhoff said he was not able to comment on matters of policy such as state-imposed masking requirements, when asked Wednesday, but said state officials are looking “very thoughtfully” at recent guidance from the CDC and the academy.

“I think you can look for guidance and recommendations to come from us in the future,” Vanderhoff said.

Though Youngstown City Schools — which stuck to remote learning following Ohio’s March 2020 school closures — is planning for an in-person school year, administrators have yet to decide on mask requirements, said spokesperson Denise Dick. Administrators expect to make a decision closer to the school year, she said.

District parents can still apply their first- through 12-graders for Youngstown’s virtual school, offered as an alternative to in-person instruction, Dick said.

Cleveland Metropolitan School District on Monday announced masks will be mandatory, at least for the first five weeks of school, Cleveland.com reported. Twinsburg City Schools will require masks for unvaccinated people as well as students under 12 — who are not yet eligible for the vaccine — and the employees they come in contact with.

Delta on the rise

New COVID-19 variants, such as the highly contagious delta variant, mutate in the bodies of the unvaccinated.

Officials on Wednesday said COVID-19 is now “a pandemic of the unvaccinated.”

As of July 3, the delta variant was detected in more than 36 percent of all the sequenced COVID-19 cases, more than double since June, Vanderhoff said Wednesday.

The state has seen a recent uptick in new cases — reporting nearly 750 new daily cases on Tuesday — which is driven by the rise of the delta variant, Vanderhoff said. The state’s two-week average of new cases has more than doubled recently, following a “long period of decline,” he said.

Though COVID-19 risks for children are few, they can be serious, the doctors said.

About 1 percent of children who contract COVID-19 develop a serious condition known as MIS-C, multisystem inflammatory syndrome in children. Many end up in the ICU or on ventilators and need “massive” doses of steroids and immunosuppressants, Edwards said.

“We have no idea what the long-term complications of those are,” she said, adding though 1 percent sounds small, it’s actually a “huge amount of children.”

More than 4 million American children have tested positive for COVID-19 as of July 15, according to the American Academy of Pediatrics. As many as 0.03 percent of child cases were fatal, according to data the academy reviewed from 43 states, New York City, Puerto Rico and Guam.

While Mahoning and Trumbull counties have seen a slight increase in their average number of new cases over the past two weeks, Columbiana County’s has more than tripled. While the county reported fewer than one new case per day from June 23 to July 7, an average 2.6 new cases per day were reported across the past two weeks, according to ODH.

Only 35 percent of Columbiana County residents have been fully vaccinated, and at such a low rate, that community “could again see an increase in illness from this virus,” reads a Wednesday news release from the Columbiana County Health District.

Less than half of Columbiana County residents age 50 to 59 have finished their vaccine, as well as less than a quarter of those age 20 to 39, according to ODH. In the past week, only 225 residents have started their vaccine. The county’s unvaccinated population can be estimated at more than 65,000.

Ohio over the past several weeks has inched toward a 50-percent vaccination rate.

Unvaccinated Americans account for 99.5 percent of the nation’s new COVID-19 cases over the past several months, according to preliminary data from the U.S. Centers for Disease Control and Prevention cited by the district.

“There is currently no shortage of the [Johnson & Johnson], Moderna or Pfizer vaccines in Columbiana County,” reads the release.

To find out where you can get the vaccine, visit the district’s website or the ODH vaccine sign-up portal at gettheshot.coronavirus.ohio.gov.