Poland Township Police Chief Brian Goodin fears the plan will place training in the hands of people with less expertise, saying "Our policy is actually more strict than the one [the state] came up with."
Jun 10, 2020 4:11 AM By: Jess Hardin 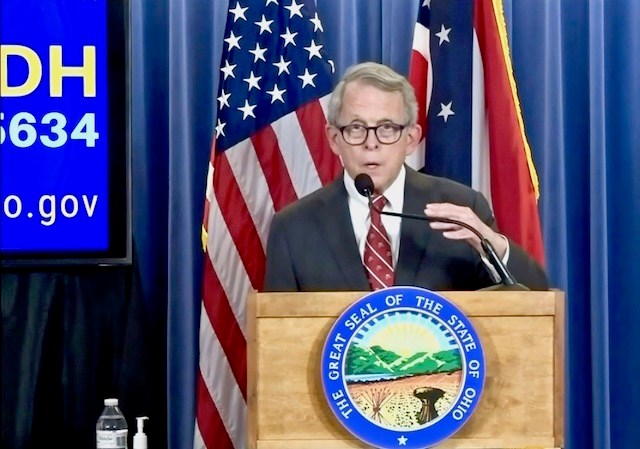 Gov. Mike DeWine during the state update on Tuesday, June 2, 2020 when he said, "We must work to create best practices for police departments and we must see that that gets adopted by all police departments in the State of Ohio."

COLUMBUS — Gov. Mike DeWine delivered on a promise made last week to introduce police reforms in response to the death of George Floyd in police custody in Minneapolis and the subsequent protests across the country decrying racism.

In comparison to actions taken elsewhere — like Minneapolis City Council's pledge to disband the police department — DeWine’s proposed changes so far are mild, though he indicated today's announcement was the beginning of a series of state reforms.

"We are going to continue to work on this. This is my first round of announcements," said DeWine. "These are additions, frankly, that I could make quickly without legislation."

First, he is encouraging local police departments to become certified in state-established minimum standards regarding use of force and hiring practices. He also announced the state would create create of standards for policing mass protests and a new Ohio Office of Law Enforcement Recruitment to recruit women and minorities to be police officers.

The standards were created by the Ohio's Collaborative Community-Police Advisory Board, a Gov. John Kasich-era initiative formed in 2015, following racial unrest in Ferguson, Mo. which stemmed from the shooting death of 18-year-old Michael Brown Jr., an African American, by white Ferguson officer Darren Wilson.

The board has established minimum standards for different aspects of policing, including vehicular pursuit, employee misconduct, bias-free policing, telecommunicator training, body cameras, use of force, use of deadly force, recruitment and hiring and community engagement.

A list of Ohio police departments’ certification levels is available on the state Department of Public Safety website.

Poland Township is one of the departments not certified.

"Our policy is actually more strict than the one [the state] came up with," said Poland Township Police Chief Brian Goodin. "So when I had my sergeant review it, he said, 'Why would be switch to something that’s less than what we already had before?'"

Goodin called DeWine's announcement "a knee-jerk reaction to something that takes place ... in another state."

When asked what changes he'd like to see from the state level, Goodin identified funding issues, pointing to a recent announcement from Attorney General Dave Yost regarding advanced police training offered by the Ohio Peace Officer Training Academy.

In a statement issued May 22, Yost said advanced training will take place in regions throughout the state, rather than with experts at OPOTA's Columbus facility; 39 jobs were cut in the decision.

Goodin fears the "revamp" will place training in the hands of people with less expertise.

The developments announced Tuesday are a continuation of trends regarding law enforcement policy since DeWIne took office in 2019: the prevalence of unfunded mandates. In 2019, the state stopped reimbursing local police departments for state-mandated training. As a result, training has become optional.

If certification is necessary, "then I guess I have no choice," Goodin said. But DeWine did not make certification a requirement or propose punishment for non-compliant departments.

In Mahoning County, 80 percent of residents live in an area in which the law enforcement agency has some certification. Of the county's 22 departments, 13 are in some phase of certification.

The following Mahoning County departments are not certified:

In Trumbull County, 49 percent of residents live in an area in which the law enforcement agency has some certification. Of the county's 23 departments, 12 are in some phase of certification.

The following Trumbull County departments are not certified: