“We’re going to try the very best, even during this time of pandemic, for people to experience his life and to experience our send-off for him,” said diocese spokesperson John Zuraw.
Jun 6, 2020 5:58 AM By: Justin Dennis and Ellen Wagner 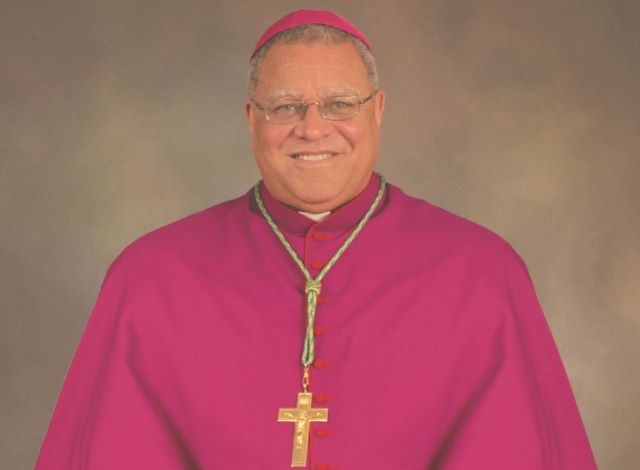 Funeral services for Youngstown diocese Bishop George V. Murry are set for next week, the diocese announced Friday. (Photo courtesy of the Catholic Diocese of Youngstown)

Bishop Murry, the fifth bishop of the Roman Catholic Diocese of Youngstown, died Friday morning at Memorial Sloan Kettering Hospital in New York after a years-long battle with leukemia. He was 71.

Rev. Msgr. John Zuraw, diocese spokesperson, said the bishop’s funeral Mass is set for 1 p.m. Friday, June 12. That service, however, will be private due to pandemic guidelines on mass gatherings. It will be overseen by Cincinnati Archbishop Most Rev. Dennis Schnurr, the Youngstown diocese’s metropolitan bishop.

“We’re going to try the very best, even during this time of pandemic, for people to experience his life and to experience our send-off for him,” Zuraw said.

Public calling hours are set for 2 p.m. to 7 p.m. the prior Thursday, June 11, at St. Columba Cathedral, 159 W. Rayen Ave. Visitors will be expected to adhere to social distancing requirements, Zuraw said.

Bishop Murry’s body is expected to return to the area Monday, into the care of Kinnick Funeral Home, he said.

None of Bishop Murry’s relatives reside locally, he added.

Following the funeral, a group of priests who represent the priest council will gather to elect a diocesan administrator, who will oversee the jurisdiction until the Vatican names Bishop Murry’s permanent successor. A new Youngstown bishop likely won’t be named for at least a year, Zuraw said

Earlier this month, Murry announced his intent to resign as bishop, after 13 years leading the diocese, citing "reasons of ill health" in his letter to the Vatican.

Murry battled two reoccurrences of acute leukemia. He was first diagnosed in April 2018, and he soon after stepped back from his daily duties with the diocese. He recovered and returned to the diocese on a part-time basis that September.

The cancer returned the following July, however, and he underwent a second round of treatment, which put the disease into remission, according to the diocese.

Murry's leukemia returned in April 2020. He was receiving outpatient treatment at his home, until his admission to the New York hospital Monday.

Zuraw said he saw Bishop Murry handle matters of the diocese, as well as his illness, with patience and “total dependence on God.”

“Even before Bishop Murry got the diagnosis of leukemia he was a man of patience. He truly weighed all the aspects of any decision that he needed to make for the good of the diocese. He did not move hastily. … He was truly a patient man and I saw that even more, now for the last three years, that he put things in God’s hands."

Cariglio said every time the bishop visited the parish he always commented on how much he liked the hymn “As I Kneel Before You, O’Lord” and wanted it to be played at his funeral mass.

“It’s a beautiful prayer of self abandonment,” Carligio said. “I looked at the words today...I think it very well describes the deep faith he had.”

Carilgio said Bishop Murry set a foundation for the future during his time as bishop.

“We are often looked at as the ‘Rust Belt' of the diocese,” Carligio said. “He was willing to deal with those perceptions and tried to lift up our area the best he could.”

Bishop Murry was also supportive of the Catholic school system and worked to clarify goals and objectives, the needs for development and identified problems.

“In terms of what needs to be done, there is a blueprint for whoever the next bishop will be to take it into that next decade,” Carligio said.

Monsignor William Connell, pastor at Poland's Holy Family Parish, said Bishop Murry was a great leader, listened to people in the diocese and was concerned about his priests.

Connell said Bishop Murry also took things to a bigger picture beyond Youngstown with his involvement with the national bishops' conference.

“He was a leader in that group for many years,” Connell said. “He had a window on the world.”

“He was very supportive of Catholic schools and came out and had a wonderful celebration with our school family,” Connell said.

“He was just a real people person,” Hazel said. “They would meet him at some event and the next time they saw him, he remembered their name. That just means so much to people.”

A MAN OF GOD

George Vance Murry was born in December 1948 in Camden, N.J., the son of the late George and Viola (Brown) Murry.

Saint Pope John Paul II in January 1995 appointed Murry Titular Bishop of Fuerteventura and Auxiliary Bishop of Chicago, where he was ordained to the episcopacy in March 1995. Bishop Murry then became Coadjutor Bishop of St. Thomas in the Virgin Islands in May 1998. He succeeded to the see in June 1999.

Bishop Murry succeeded Bishop Thomas J. Tobin as the fifth bishop of the Youngstown diocese. He was installed on March 28, 2007, becoming the first African-American bishop to lead the diocese.

Bishop Murry also served on the U.S. Catholic Conference of Bishops committee to address racism, which developed the conference's pastoral letter on racism, used as an educational tool in church jurisdictions across the country.

Bishop Murry was also among 18 members appointed to the Ohio Task Force on Community-Police Relations by then-Gov. Jon Kasich.

Bishop Murry attended St. Joseph’s College Philadelphia in Pennsylvania, St. Thomas Seminary in Bloomfield, Conn. and St. Mary’s Seminary in Baltimore, Md., where he received a Bachelor’s degree in Philosophy in 1972. He entered the Society of Jesus that year and was ordained for its Maryland Providence in June 1979. He earned a Master of Divinity degree from the Jesuit School of Theology in Berkley, Calif. In 1979 and a doctorate in American cultural history from George Washington University in Washington, D.C. in 1994.

• Youngstown Mayor Jamael Tito Brown: “Lynette and I are saddened by the passing of Bishop George Murry. He has been a true friend and mentor to me during my time in public service. I will be forever grateful for his guidance in my life and his steadfast leadership in the Valley. The Mahoning Valley will miss his echoing words of wisdom and his reassuring smile.”

• Youngstown State University President Jim Tressel: “He was just always there when you needed him. On the other hand, you just never felt as if he stepped in where he wasn’t needed. He just had a great willingness to do whatever he could on behalf of the community. ... He’s one of the special people we were blessed to have in our Valley."

• Gov. Mike DeWine during an afternoon briefing expressed his condolences “to those who loved” Bishop Murry. “Our prayers are certainly with all those in the diocese who loved him,” he said.

• U.S. Sen. Sherrod Brown, D-Ohio: “Our hearts go out to the friends and family of Bishop George Murry, who broke down barriers and fought for social justice. Bishop Murry’s leadership will be missed in the Mahoning Valley, as well as his generous spirit.”

• U.S. Rep. Tim Ryan of Howland, D-13th: “I am saddened to hear of the death of Bishop George Murry. He was a great man and a strong and committed leader not only to the Catholics in the Diocese of Youngstown, but to the community-at-large. At a time when we face so many issues that need the attention of good leaders, his voice will be deeply missed."