At today's briefing, Gov. Mike DeWine plans to announce new recommendations for police reform in the state.
Jun 17, 2020 4:25 AM By: Justin Dennis 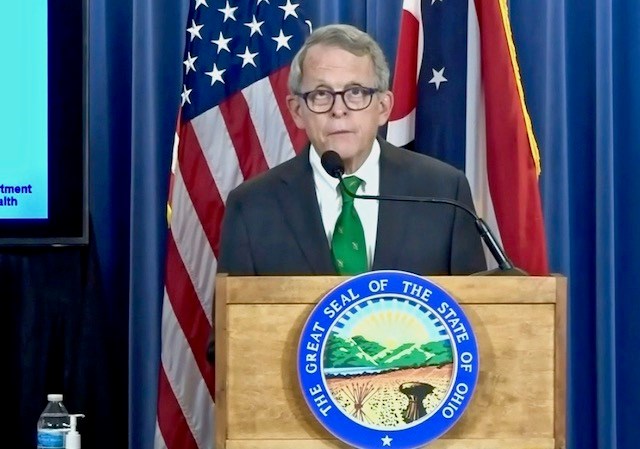 COLUMBUS — The coronavirus reproduction rate in a region that includes the Mahoning Valley is in-line with the state average, Gov. Mike DeWine said.

During Tuesday's briefing on the state's coronavirus response — the first following the resignation of Dr. Amy Acton as state health director — DeWine presented the latest R0 (pronounced "R-naught") calculations for state by region. The mathematical measure indicates how many people one coronavirus carrier might infect.

In a region including the Valley, neighboring Portage, Stark and Carroll counties and several other counties further west, virus reproduction was measured at 0.87 as of June 7, suggesting some virus carriers in the region have not infected others.

Regions in the southern portion of the state, however, have the highest R0 rate of 1.0, suggesting carriers in those regions are, on average, passing the virus on to one other person. In the state's northwest corner, between Mercer, Williams and Huron counties, reproduction is measured at 0.65, the lowest rate in the state.

Statewide, the R0 is 0.87, the governor said. In March, it was nearly 2.0, he said. Without any mitigation efforts like social distancing and masks, the reproduction rate would be estimated at 2.5.

"None of these are really alarming. ... What we want to do is continue to watch the movement," DeWine said.

DeWine plans to be joined by Ohio Attorney General Dave Yost and members of the Ohio Legislature.

The governor last week announced the state would encourage Ohio law enforcement agencies to become certified — if they have not already — through the Ohio Collaborative, which years ago developed new standards for use of force, community policing and police bias training.

He's suggested further measures could include a database to track police misconduct and new ways to keep bad cops off the force permanently.

He also suggested the measures would devote more resources to training officers on handling encounters with the mentally ill or drug-addicted. As Ohio Attorney General, DeWine said authorities saw "police dealing with things they were not prepared to deal with — they had to be almost a social worker at the same time.

"How we tackle that and the money we spend on both of these issues is where the debate is going in this country," he said. "The idea of defunding the police makes no sense. We have to have a police force and to be trained and very well-trained."

UNEMPLOYMENT OUT OF MONEY

DeWine also announced Tuesday the state has requested a $3.1 billion line of credit from the U.S. Department of Labor to meet its unemployment obligations for the year. That's more than the state expects to pay in benefits, he said.

Other states including California and Texas have also had to borrow due to the coronavirus pandemic, he said.

Ohio borrowed about $3.3 billion in 2009, joining more than 30 other states that borrowed during the Great Recession. The last payment on Ohio's debt was made in 2016, DeWine said Tuesday.

Interim Ohio Department of Health Director Lance Himes on Tuesday signed an order allowing county fairs and animal exhibitions to reopen, with some exceptions, including:

DeWine also said state officials expect to have K-12 school reopening guidelines prepared within the next 10 days. He stressed they would allow decisions on future illness-related closures to be made at the local level, similar to how school districts may choose to temporarily close due to seasonal flu outbreaks.

Here are other recent coronavirus developments around the state and nation:

• According to the latest figures Tuesday from the Ohio Department of Health, the state is reporting 38,911 confirmed cases of the coronavirus. There have been 1,607 confirmed cases in Mahoning County; 665 in Trumbull County; and 921 in Columbiana County.

• Statewide, there have been 2,362 confirmed deaths, including 218 in Mahoning County; 54 in Trumbull; and 57 in Columbiana. Mahoning County's 218 reported COVID-19 deaths on Tuesday was fourth among Ohio's 88 counties; Franklin County had the most with 334.

• The Valley's Toastmasters Club, a public speaking group that typically meets in-person with handshakes and close settings, has transitioned to online-only meetings.

• According to the Pennsylvania Department of Health on Tuesday, there are 79,471 COVID-19 cases in the state which have led to 6,277 deaths. The state reported that 74 percent of people who have been diagnosed with the virus have recovered. There are 87 cases in Lawrence County with 8 deaths; 117 cases in Mercer County with 6 deaths.