What we know so far about GM's new Lordstown venture

What we can expect from the facility, the wages offered and the future of advanced manufacturing in the Valley
Jan 20, 2020 3:53 AM By: Justin Dennis 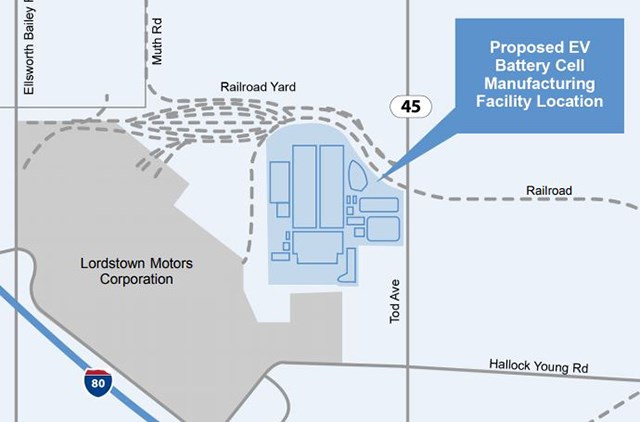 LORDSTOWN — About a year after General Motors announced it would stop making cars at its former Lordstown Assembly Complex, it unveiled a new, $2.3-billion joint venture that would put about 1,100 people back to work.

GigaPower LLC, the working name for the joint venture between GM, one of the U.S.’ “Big Three” automakers, and South Korea’s largest chemical company, LG Chem, is still in the planning stages and will likely receive regulatory approval this quarter.

Here’s what we know so far about its scope, its local impact and its jobs potential.

“The state-of-the-art plant will use the most advanced manufacturing processes to produce cells in the most efficient manner possible,” it reads. “The new plant will be extremely flexible and able to adapt to ongoing advances in technology and materials.

“This new facility positions the Mahoning Valley as a major hub for technology and electric vehicle manufacturing.”

The majority of the proposed plant’s footprint is about 1.6 million square feet of manufacturing space, not including supporting structures like office space, access roads, stormwater management systems or employee parking.

The automaker considered several suitable sites in the area but chose the parcel just east of Lordstown Motors Corp. for its size, immediate availability and access to rail and highway transportation and other infrastructure. Only Mahoning Valley sites were considered due to “an existing experienced labor force” as well as “the region's positioning as a technology hub.”

“Bringing new jobs in the area and establishing battery cell manufacturing expertise were driving factors behind the selection of the location,” the permit reads.

The industrial-zoned parcel is valued at $312,300 according to the Trumbull County Auditor’s Office and listed for sale at $2.06 million on the JobsOhio website, with a per-acre cost of $35,000.

The parcel was former GM land which was liquidated after the automaker filed for bankruptcy in 2009, GM spokesman Dan Flores confirmed.

The site has two inactive natural gas wells and one that is still active and could be capped or used as a “free or low cost” resource, according to JobsOhio.

The permit indicates electric energy infrastructure in the area can’t meet the plant’s demand, meaning a portion of the site could be dedicated to a new regional electrical substation, to “speed development.”

The potential for expansion at the Tod Avenue site is currently undetermined, according to a site summary included in the permit. That summary, however, shows that site checked off nearly every other box, when compared to the five other sites considered, each of which did offer growth potential.

Protracted purchasing arrangements for a second “finalist” site — a more than 300-acre plot just across Ellsworth Bailey Road from the Lordstown Motors Corp. plant, first identified by Mahoning Matters in early December — threatened to delay the project, according to the permit.

Other sites considered were along Leonard Parkway in North Jackson, at Lordstown’s Ohio Commerce Center and in Warren, at the former RG Steel facility along Pine Avenue Southeast.

Construction at the Tod Avenue site is expected to finish in January 2022, according to the permit.

The site was clear-cut in 2015 and now contains nearly 66 acres of wetlands that are part of the Mahoning River watershed which would be impacted by the new development.

The development plan includes creation of more than 130 acres of new wetlands in the Mosquito Creek Wildlife Area, which is part of the same watershed.

Habitat studies included in the permit indicate the construction wouldn’t impact native creatures, including the endangered Indiana bat, which was not spotted in the area.

The Federal Emergency Management Agency considers the site to have a minimal flood risk. The proposed site would include a stormwater management system to keep peak discharge rates below pre-construction levels.

“Downstream sites will not be at greater risk from flooding as a result of the project,” the permit states.

The site would produce batteries using lithium, which can pollute groundwater. As part of the site’s pollution discharge permit, a stormwater pollution prevention plan would be developed. Through pollution control methods like dust collectors inside the plant and tightly designed substance storage tanks, the facility won’t affect groundwater, “therefore, no negative impacts are anticipated … either on-site or downstream off-site,” the permit states.

Lordstown Mayor Arno Hill told Mahoning Matters he expects village officials to set a meeting with GM representatives on the plant proposal before the end of the month.

The site is designated as an Enterprise Zone as well as a Community Reinvestment Area, both of which offer tax incentives on new development or redevelopment.

The former would be administered at the county level and could exempt GM from paying any property taxes on the new construction for up to 15 years.

The latter, however, is administered by the local municipality and could offer an up to 75-percent property tax abatement for up to 15 years.

Hill said Lordstown Village has offered numerous CRA abatements since the 1990s when General Motors attained two for the Lordstown plant. The village’s most recent abatement was offered for the TJX HomeGoods distribution center — a 10-year, 75-percent break, which has been the village’s average offering over the years, Hill said.

Other abatements in the village have gone to Magna Seating, Matalco, Anderson-DuBose and the Lordstown Energy Center, which received a 100-percent abatement for 15 years.

The new plant is projected to create 1,100 permanent manufacturing jobs, aside from temporary construction jobs and indirect jobs in supporting industries like healthcare, food service, education or retail.

There’s no clear indication of how well the plant’s manufacturing jobs will pay, but a passage from the site’s EPA permit suggests the average annual salary for a plant employee would be $25,000.

Flores said, however, that’s likely a placeholder figure. As the joint venture has yet to be fully formed, wages are a discussion for later. He did say, however, wages would likely be competitive with other similar supply facilities in the electric vehicle industry.

For context, production workers at Tesla Motors’ Gigafactory in Sparks, Nev. make between $16 and $19 an hour, according to Indeed.com.

And because the vehicles themselves have fewer parts, that means fewer workers are needed.

“It’s not drastically different, it’s just specialized,” she said. “This is a shift in the local economy.

“I think your traditional sense of economic development was ‘let’s get a factory that employs 5,000 people, let’s give them ‘the farm’ in tax abatement and we’re done,” Petrolla said. “I think there’s potential for this to be restructured.”

Petrolla said she sees the new joint venture as an opportunity for GM to “put its money where its mouth is” and invest in an advanced manufacturing training pipeline that includes tech-skill and engineering programs at area schools and Youngstown State University.

To meet the new plant’s demand for workers when it comes online in 2022, those working to develop local workforce should better coordinate with manufacturers and hear their needs, Petrolla said.

“I think it’s time for us to realize some of the gaps in that system. There’s been a lot of work in bringing education and folks in industry together, but this is going to be a real time to shine with that,” she said. “I think the Valley wants it. A lot of what we hear right now is cheering and [happiness] that something got landed there … I think it’s up to everyone to show their commitment.”

“We have no way of knowing how many former autoworkers [who] remained in the Valley would be interested in working for either Lordstown Motors or the battery facility until those jobs are actually available to apply for,” O’Hara said.

“I know some have expressed interest in applying for those jobs while others prefer to stick with their new careers whether in the medical field, driving trucks or heavy equipment operators,” he said. “Obviously, the wages, benefits package and whether the new jobs are UAW will likely determine how many former Local 1112 members apply.”

During the joint venture announcement in December, GM CEO Mary Barra said it would be “up to the workforce” if the new plant’s employees would be UAW members.

O’Hara said he expects a typical union organizing process for the new plant, a membership drive by the union which ends in an employee vote to unionize or not.

“The labor laws in the U.S. make union organizing very difficult with the companies holding mostly all the cards,” O’Hara said. “Even after a union is voted in, it could still be years until a labor contract is negotiated and ratified.

“We will see how accommodating the joint venture between GM and LG is to their employees being union workers.”