Ohio drilling down on COVID-19 in state prisons 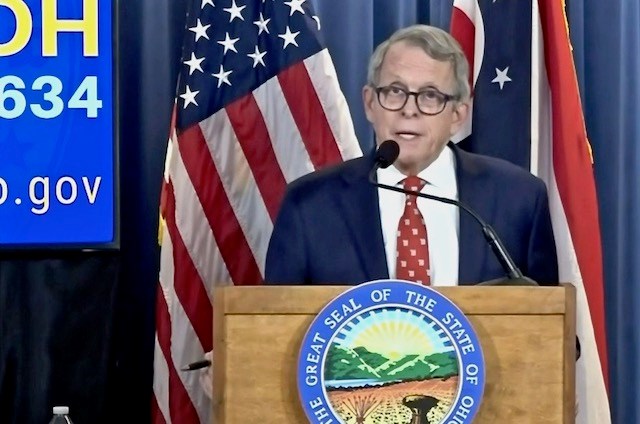 COLUMBUS — The Ohio Department of Rehabilitation and Correction's coronavirus strategy focused largely on keeping the virus out, because there would be "very little success in stopping it" once inside.

During a Thursday briefing on the state's coronavirus response, Annette Chambers-Smith, ODRC director, outlined several measures the state prison system has taken to curtail the virus' spread, including the addition of hygiene and sanitation products, strict cohorting of inmates and conversion of prison gymnasiums and chapels into living spaces to allow for more social distancing.

The state prison population has decreased by 1,379 inmates since March 24, she said, partly due to new judicial releases and executive clemency orders and sentence commutations from DeWine's office.

ODRC has also begun offering hotel stays to corrections officers who don't want to return home and possibly expose their families to the virus, as well as 40 hours of additional medical leave.

"We don't want our staff to have to come in sick and choose between a paycheck or taking time off," Chambers-Smith said, adding employees who show symptoms of the virus during daily screenings are sent home.

Of the 4.1 million pieces of personal protective equipment distributed this week across the state, about a quarter went to state prisons, Ohio Gov. Mike DeWine said Thursday. That includes 108,000 N95 masks, 256,000 gloves and 100,000 cloth masks for inmates.

"This equipment is vital to the safety of our corrections staff and the inmates who they guard," he said. "Our goal is to keep a 90-day supply of the most critical equipment."

When asked about reports received by the Associated Press from Ohio corrections officers who "paint a different picture" of the state prison system's response — claiming a persistent lack of PPE and procedural missteps put officers in an "untenable position" — DeWine said the statewide lack of PPE hasn't been a secret, and that prisons should now have what they need.

"Could they have been short early on? I can check with the director [Chambers-Smith] on that ... it's been short everywhere in Ohio," he said.

ODRC today expects to finish testing all employees at that facility who have opted for tests, Chambers-Smith said.

"That was a critical step. We learned so much from that," said Dr. Michael Para, infectious disease physician at Ohio State University Wexner Medical Center in Columbus. "What was so amazing ... is how many people were positive and had no symptoms at all and were feeling fine."

Mass testing at the Marion prison revealed 96 percent of inmates who tested positive were not showing symptoms of the virus.

In Columbiana County, mass testing of the inmate population at Lisbon's Federal Correctional Institution Elkton began Thursday and will continue in phases "until all inmates are tested," said Joseph Mayle, an Elkton corrections officer and president of the American Federation of Government Employees Local 607, which represents those officers.

He said the first to be tested are quarantined inmates on-track to be released from the prison within the next two weeks. About 43 inmates are set to be released next week alone, either on full-term release or to halfway homes, he said.

Mahoning Matters on Thursday reached out to a federal Bureau of Prisons representative for confirmation but did not receive a reply.

The bureau has released more than 1,800 inmates nationwide to home confinement since late March, under guidance from the U.S. Department of Justice — an increase of more than 65 percent, according to the bureau.

The low-security FCI Elkton currently houses about 2,400 inmates, according to the bureau.

The bureau on Thursday reported a total 97 active cases of the virus at Elkton, including 49 among inmates and 48 among staff — the largest number of staff infections among federal prisons with confirmed cases — and seven inmate deaths, the highest number alongside FCI Oakdale in Louisiana.

There are no plans for mass testing of Elkton employees, who have previously sought out tests on their own, Mayle said.

“Even as we make strides in Ohio to quell this pandemic, outbreaks in congregate settings like prisons can spill over through the staff and medical professionals who are coming in and out of the prison each day to care for these inmates and could undo the progress that we are making," Portman wrote. "Additional testing today could save lives and resources. I urge the Department of Justice and Bureau of Prisons to ensure that FCI Elkton can test all those who need to be tested, including potentially asymptomatic carriers of COVID-19."

Portman on Monday also announced the prison would this week begin receiving 100 tests per week, allowing testing to extend to asymptomatic inmates.

Mayle told Mahoning Matters last week though the prison now has its own virus testing device, it was only receiving enough swabs to test 25 inmates per week. On Thursday, he reported the prison may start receiving 250 of the swabs per week.

"We are waiting to see if we get them. But we have enough to get started," he said.

• According to the latest figures Thursday from the Ohio Department of Health, the state is reporting 17,285 confirmed cases of the coronavirus. There have been 828 confirmed cases in Mahoning County; 308 in Trumbull County; and 253 in Columbiana County.

• Statewide, there have been 898 confirmed deaths, including 80 in Mahoning County; 31 in Trumbull; and 23 in Columbiana. Mahoning County's 80 reported COVID-19 deaths on Wednesday was the third-highest among Ohio's 88 counties; Lucas County had 117; Cuyahoga County reported 112 deaths. Mahoning's death toll dropped by one from yesterday, as one reported probable death was reclassified after the decedent tested negative for COVID-19.

• The City of Youngstown on Thursday reported 179 total cases, including 48 hospitalizations and 12 deaths.

• Eastwood Mall will reopen to the public May 12 with heightened safety measures in place. While normal mall hours will resume, officials suggest shoppers contact stores directly for hours of operation.

• The Western Reserve Transit Authority announced Thursday riders will be required to wear masks beginning Monday. Riders who don't have one won't be allowed to ride the authority's scheduled countywide buses.

• Youngstown State University President Jim Tressel issued a message to the community Thursday about how the institution is coping amid the COVID-19 pandemic. He warned the future will likely see "painful choices and sacrifices across every area of the university."

• Ohio Department of Health Director Dr. Amy Acton's stay-at-home order, though slated to expire today (May 1) has been extended, but with exceptions for workers whose employers have been allowed to resume business, including: Medical facilities including dentist's and veterinarian's offices on May 1; manufacturing, distribution, construction and general office settings on May 4; and retail and consumer services on May 12. Otherwise, the order functions as previously designed. Ohio Gov. Mike DeWine said Thursday, "People can certainly go to the grocery store, they can meet with their own family at home, they can take walks; do a number of different things."

• Ohio Gov. Mike DeWine said during the state's Thursday briefing state officials expect to share more information today or Monday on an initiative to test representative samples of the state's population, in order to determine coronavirus' prevalence among the general public — the same testing scheme used recently in New York City. Dr. Amy Acton, Ohio Department of Health director, has said the state has been awaiting a shipment of 1,000 tests for that purpose.

• Though dentist's and veterinarian's offices today may begin resuming medical procedures previously postponed under state orders in an effort to conserve PPE, Ohio Gov. Mike DeWine on Thursday clarified facilities that can't find enough PPE due to market shortages should reconsider resumption. "The supply chains are a mess," he said. "It's certainly possible there's a dentist out there that does not have those supplies. We're trying to do what we can. In the private sector, everyone's trying to do what they can to get the PPE they need. It's certainly, I'm sure, a work in progress."

• Another 131,282 Pennsylvania residents filed for jobless benefits during the week ending April 25. That brings the total for the past six weeks up to about 1.6 million.

• According to the Pennsylvania Department of Health on Thursday, there are 45,763 COVID-19 cases in the state which have led to 2,292 deaths. There are 65 cases in Lawrence County with 6 deaths; 65 cases in Mercer County with 1 death.